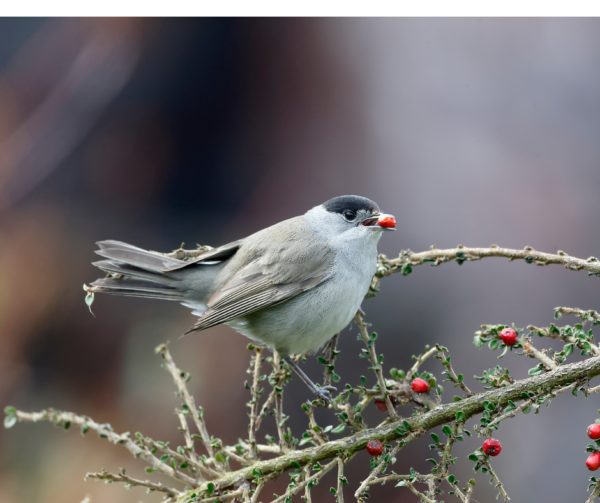 In the aftermath of autumn`s completion of harvest, a generous carpet of apples usually awaits the immigrant thrushes, particularly Fieldfares and Redwings.

The Fieldfare; with its pale grey rump and black tail, contrasting brown back and white belly is a familiar orchard visitor from northern and central Europe. Sometimes occurring in hundreds, its low, throaty ` chak-chak-ak` chattering is prominent when disturbed from the orchard aisles.

The Redwing has a bold head pattern with a cream-coloured stripe above the eye, a brick-red flank and prominent lines of dark spots on the breast. It is a smaller thrush than the Fieldfare with a tendency to be wary and flighty. The call-note is a thin `tseeep` and readily heard on November nights as thousands migrate into the UK from N and Europe.

Whilst both species readily feed on hedgerow fruits and berries, the orchards are much favoured as the lying fruits soften and break down. The ground disturbance further invites smaller passerines such as Chaffinches and Goldfinches to search for seeds and insect-life. Their numbers are also multiplied by migrants from Europe, with Siskins and Redpolls feeding in the alders along the field margins, whilst the occasional Yellowhammer brightens a damp, dreary sunless day.

The weather systems dominate the movement of these winter birds, which significantly swell the numbers of our resident Robins, Song Thrushes and Blackbirds. The residual harvest is a major food source, particularly if temperatures plummet and ground conditions harden.

Surprisingly, a few summer migrants such as Blackcaps and Chiffchaffs now linger through winter, as a result of the average rise in winter temperatures providing milder conditions. Their insectivorous diets are however considerably lessened in the winter months and both species are recorded as sampling orchard fruits, with the former becoming a regular visitor to gardens with their domestic, fallen fruits, particularly soft skinned pears.

Some years see major eruptions of colourful Waxwings from the NE. They are Starling sized, heavy bodied with a prominent crest, and whilst berries from hawthorn and mountain ash are favoured dessert apples and ornamental malus fruits are very much part of their winter diet.

A real orchard avian spectacle not to be missed should the opportunity arise!

Often the most populous species in the winter orchard is the Starling. Again, numbers are swollen with immigrant birds from the near continent and many hundreds on occasion form the swirling `murmurations` prior to roost.  It is many years now since the orchards in Brogdale’s surrounds were winter home to twenty- thousand birds !!

How to visit Brogdale’s orchards

Anyone with a Brogdale Orchard Passes can visit the orchards throughout the year.  What a great time to spot the birds with reduced leaf cover and the fallen fruit attracting feeders.

Thank you to Mike Roser, Brogdale Collections’ volunteer and resident nature expert, for writing this article.